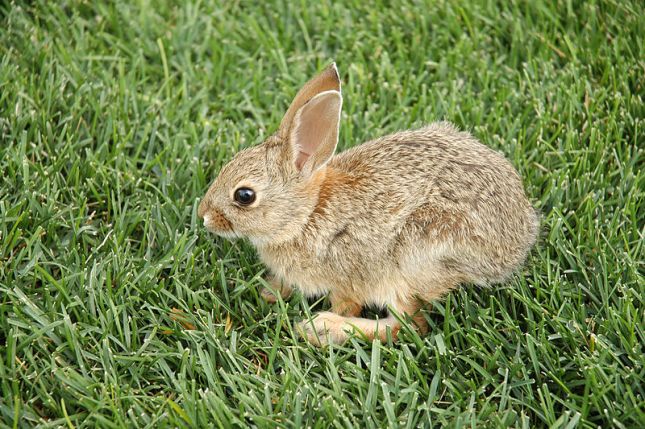 Please Patrick Durkin, save us from this vicious animal!!!

As usual the big bad rabbit slayer, Patrick Durkin, has to chime in about how bad wildlife advocates are for getting in the way of him killing a wolf. Apparently he thinks that the lawsuit was filed to make lawyers rich, rather than to protect wolves and dogs from fighting. Here is the usual drivel:

“No one’s surprised the state’s humane associations and various wolf advocates found the time and money to sue the Wisconsin Department of Natural Resources in hopes of stopping folks like me from hunting wolves this fall and winter.

Still, why not devote their talents to money-generating programs that sustain long-term wolf research and management, so critters other than lawyers benefit?”

Critters? I hate that word. I usually only hear rabid killers of animals use that term. Then we have Durkin having the nerve to compare wolf and dog fighting to a goose “wing-beating a Labrador.” What? Check this out:

“Fascinating stuff, this lawsuit. The plaintiffs -– claiming to advocate for wolves and dogs alike -– contend the hunt must be stopped because the DNR didn’t impose enough restrictions to prevent “deadly animal fighting,” which violates Wisconsin’s “animal cruelty law.”

They cite the fact wolves can’t climb trees like a bear or raccoon to escape pursuers. Fair point, but what about a bear standing its ground, a raccoon drowning a hound, or a giant Canada goose wing-beating a Labrador? Why pretend wolf altercations are somehow unique and uglier?”

WTF???? Really? They must be “unique and uglier” because bear hounders have been getting paid hundreds of thousands of dollars since 1985 for dogs allegedly killed by wolves. Is this guy for real? The Wisconsin State Journal should be ashamed of themselves for even allowing this drivel to be printed. Even the Milwaukee Journal Sentinel’s hunter shill, Paul Smith, is far more level headed than this guy, and a much better writer.

Durkin ends the article by pointing out that most bear hounder dogs are killed before the hunting seasons while wolves are defending their pups. Really? An animal defending their young from packs of vicious dogs allowed to run loose through the woods. The nerve! This guy just does not get it? The WSJ really needs to rethink allowing this guy to write for their paper. Maybe he should just stick to protecting us from those big bad bunnies.