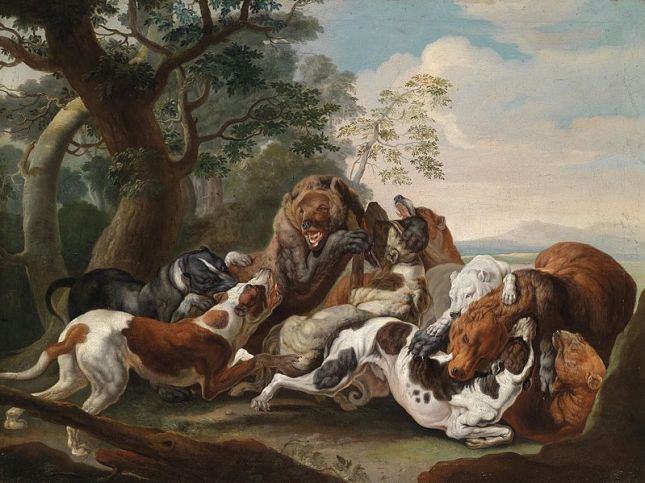 On July 1st of this year the Wisconsin DNR is sanctioning the release of an invasive predatory species upon the northern part of our state. This species is a viscous predatory canine with an insatiable appetite for blood, grandchildren :), and any wildlife species that is in their path. Is it the gray wolf? No. Is it the coyote? No. Fox? No again. It is a species known as “hounddogus redneckus.” Also known as the “bear hound” and it will be terrorizing Wisconsin bears and other wildlife with impunity starting July 1st when thousands of these invasive species are released into our woods for “training” against bear or whatever species gets in their way.

While researching this post, I made sure to read deeper into the DNR “rules” concerning the use of dogs against wildlife. What I found was horrifying. Here are the “rules” for “training” dogs against wild animals from the DNR:

Except as described in ‘Prohibitions’ below, any person may train dogs on free-roaming wild animals without a dog training or trialing license.

Except where prohibited in state parks, campgrounds, natural areas and other posted areas, from July 1 to the following April 14th, hound dogs may be trained on free-roaming raccoons and rabbits on department lands without a leash.
Northern restricted zone.

Dog training on any captive or free-roaming wild animal is prohibited May 1 to June 30 on all lands within the northern restricted zone, except as follows:
A person may train or trial dogs on captive or free-roaming raccoons and rabbits in the northern restricted zone May 1 to June 30 provided all the following apply:
1. The licensee applies for and receives a hound dog training or trialing license.
2. The licensee complies with any restrictions placed on a license to prevent the intentional or unintentional pursuit of wild bear.

So basically raccoons and rabbits can be hounded for the entire year with “some” restrictions.

3. The licensee may list up to 3 townships in the same or adjoining counties for training purposes.
4. The department approves the property locations listed.
5. No more than 2 dogs in a single pack may be used to pursue raccoon or rabbit for training purposes regardless of the number of persons assisting or accompanying the hound dog training license holder and regardless of the dog ownership.
6. For trialing purposes, the location of the Master of Hounds and the name of any approved state properties where the dog trials
are to be held shall be listed on the hound dog trial license and application.

An individual may ONLY use dogs to pursue free-roaming wild bear from July 1 to August 31and provided:
The person possesses a class A or B bear license or is under age 12;
Each dog is uniquely tattooed or wears a collar with the owner’s name and address attached;
No more than 6 dogs in a single pack may be used to pursue bear regardless of the number of persons assisting the licensee and regardless of the dog ownership.
NOTE: Bears may not be pursued where prohibited in state parks, state campgrounds, state natural areas or other posted or restricted areas.
Killing wild animals. No person engaged in training dogs may kill or cause to be killed any free-roaming wild animal including unprotected wild animals without department approval.

So in other words raccoons and rabbits can be hounded for almost the entire year and hounders apparently can kill wild animals with the approval of the DNR? So under what circumstances can the DNR approve hounders to kill wild animals and how often does this “approval” occur? We will work on getting this information.

Issued to any individual who is at least 12 years of age who files a dog training license application and pays the applicable fee.

CARE AND TREATMENT OF BIRDS AND ANIMALS
Captive wild birds possessed for dog training purposes shall be treated in a humane manner and confined under sanitary conditions with proper and adequate space, shade, food and fresh water. If birds are severely injured, they shall be humanely killed. Primary and transportation enclosures for captive-bred bobwhite quail and mallards shall meet the requirements in § NR 16.30 to 16.38, Wisconsin Administrative Code.

Captive raccoon, rabbit/hare, coyote, fox, bobcat or bear possessed for dog training purposes shall be treated in a humane manner and confined under sanitary conditions with proper and adequate space, shade and fresh water. Dogs may not be released into a training enclosure with the intent to injure of kill any captive rabbit/hare, coyote or fox. Captive rabbit/hare, coyote, fox, raccoon, bobcat or bear may not be shot inside a training enclosure or cage. Any coyote or fox injured during a dog training exercise shall be submitted to a veterinarian for treatment at the owner or operator’s expense, or euthanized and shall be reported to the department within 24 hours.

Really? What does the DNR think is the purpose of releasing vicious dogs dogs into a pen with wild animals? Who enforces this farce? Do they seriously think that the animals in these enclosures are not ripped to shreds by these dogs? Seriously, WDNR?

b. A minimum of 8 consecutive hours of rest within a 24-hour period shall be provided during which no dog training or trialing may take place within an enclosure containing captive coyote or fox.

How generous. What is wrong with these people and their enablers in the DNR?

This is how these monsters acquire their torture subjects:

Unless authorized by the department, captive wild animals from out of state may not be used within a hound dog training enclosure. If the department authorizes use of an imported captive animal for use in hound dog training enclosures, the animal shall be accompanied by a certificate of veterinary inspection as required under s. ATCP 11.02 and a copy of the certificate maintained with the records required to be kept under s. NR 17.11(5) and a copy shall be provided to the department with quarterly reports required under s. 169.36(9)(b), Stats. When determining whether to issue an authorization under this subsection the department shall consider whether the animal originates from a state or country with suspected or known infectious wildlife diseases.
Note: To request the use of an imported captive wild animal, contact the state wildlife veterinarian, (608) 266-8204.

Notice all of the “unless approved by the department.” I would bet that there is plenty of “approvals” coming from this DNR to appease these sadists. And that is not all. Here is more from the DNR about what bear hounders are allowed to do:

Dog Training and Use
Dogs may be trained by pursuing bear statewide from July 1
through Aug. 31. It is legal to train dogs in Zones A, B, and D
during the season when hunting bear with aid of dogs is open.
A Class B bear license is not required to train or assist with bear
dog training on Aug. 17-18, 2013.
It is illegal to:
• hunt bear with dogs in Zone C.
• train dogs by pursuing bear except during the times stated
above.
• hunt or train dogs unless one person in the group has on their
person rabies tags and dog license tags for each dog.
• hunt, train dogs, or pursue bear with a dog that is not tattooed
or that isn’t wearing a collar with the owner’s name and
address attached.
• allow the dogs to kill any wild animal.
• hunt, train dogs, or pursue bear with more than 6 dogs in
a single pack, regardless of the number of bear hunters or
the dog’s ownership. Note: Dogs that fall out of the chase
may be replaced, but no more than 6 dogs may be used
to pursue bear regardless of the number of bear hunters
or the dog ownership.
• hunt or pursue any free-roaming wild animal with the aid of
any dog from May 1 to June 30 north of the highways shown
on the map below except for approved dog trials and training
on free-roaming rabbits or raccoons
under a hound dog trial or training license.

A former hounder made it very clear to us that during these “training” periods he estimated that 30 percent of the bears chased by the hounders were killed. According to sources within the DNR there are a number of bear hounders that are unhappy with all of the attention they are getting due to the wolf hounding issue. Good. They have flown under the radar far too long and many are upset that their “sport” is being exposed for the sadism that it truly is. We need to keep exposing this blatant state sanctioned cruelty and showing what hounders and their DNR enablers are all about. If you want a good idea about what kind of cretins are involved in this type of activity watch these videos:

Here is another one from North Carolina that shows how these people operate:

Keep spreading this information and videos far and wide. We need everyone to see what kind of people these hounders are and what they are doing to our wildlife. Remember all of these activities are sanctioned and encouraged by the DNR. This is one invasive species that we can do something about.

Posted by dvoight09 on June 28, 2013 in Bears, Hounding, Other Wildlife, Uncategorized, Wisconsin Insanity