RSS
← Patricia Randolph’s Madravenspeak: As CWD rises in deer herd, what about risk for humans?
DNR: No Violation of Any Kind Committed by Hounders “Training” Their Dogs in 2012 → 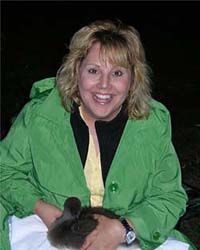 Since January of 2011 so many of us have been asking “what the hell has happened to Wisconsin?” The fascist blitzkrieg that our state has endured has been nothing short of shocking for those of us that believe in democracy and the will of the people. But then when I look at public opinion polls I see that consistently 50 percent of the people in this state support Scott Walker and his regressive agenda. For me that is even more horrifying than the acts of the Koch puppet himself. Today there was a glimmer of hope in the latest Marquette University Poll that showed Il Douche’s approval rating dropped to 48 percent.

So what does this have to do with Wisconsin wildlife? Everything. Scott Walker, and President Obama for that matter, have been absolute disasters for our environment and the wildlife that inhabit the land. Nothing illustrates this more than Walker’s appointment to DNR Secretary real estate developer Cathy Stepp. Like Walker, Stepp does not have a college degree and had ZERO qualifications to run an agency tasked with enforcing environmental regulations and “managing” wildlife. If evidence is needed that this woman is shockingly out of her depth take for example what she told the Beloit Daily News last week.

Stepp said she believes a healthy environment leads to a healthy economy for Wisconsin, and vice versa. To accomplish Gov. Scott Walker’s goals for creating jobs in Wisconsin, Stepp said it’s more important than ever to help businesses navigate through the permitting process.

“We are a permitting agency rather than a prohibitive agency,” Stepp added.

Stepp encourages businesses to call the DNR first so the agency can work with businesses to identify issues and develop plans to work through the process.

“Let me help you walk through process,” she said. “We (the DNR) can be the biggest hurdle, or help, to businesses navigating through the system to create jobs.”

Remember folks this is the agency tasked with making sure the air you breathe and the water you drink is safe. So instead of being the enforcement arm of the environmental regulations that protect all of us, Walker and Stepp have turned the DNR into the best buddy of business and now “walks them through” the process of destroying our land and water. The future sure looks bright, doesn’t it? Since when is it the responsibility for an enforcement agency to be “customer friendly?”

Then we have the issue of wolves and other wildlife. What came out of Stepp’s mouth is the most disingenuous pile of garbage that I have ever heard from her or any of her minions.

With all that is on the DNR’s radar Stepp said she spends much of her time in discussions with Native American tribes, covering a variety of topics including mining as well as wolf hunting and walleye fishing.

With an increasing wolf numbers, the DNR has been working to manage the population while respecting the spiritual connections the tribes have to the animals, as well as other activists’ concerns, Stepp said.

She said the DNR is working to rebuild trust with the hunting community and to keep outdoors activities fun, whether for deer, fish or wolves.

Increasing wolf numbers? Didn’t her own agency just come out and say that the wolf population was “flat or declined slightly?” And where has she been working with tribes and other activists’ concerns? By massively increasing the kill quota? By pushing to allow hounders to “train” their dogs on wolves right through breeding, denning, and early birthing season? And how does communicating with the tribes relate to “building trust” with the hunting community? they can already kill animals in this state year round and have some of the most liberal killing methods known to man. And Stepp wants to give them more? I ask myself, does this woman really believe that the public is that naive and stupid? Then I remind myself that polls consistently show 50 percent of the population support Walker and his goons.

After this article was published in the Beloit paper, political blogger James Rowen, pointed out that DNR officials quickly put out an email telling their staff to “document” all face to face contacts with tribal officials. My guess is that concerned citizens asked Stepp to provide proof of all of her “discussions” with tribal members regarding the wolf slaughter and other issues. I would also bet that she quite embellished the scope of her tribal interactions.

So for the 50 percent (currently 48 percent) of Wisconsinites that support Walker and by default Stepp, this is what you get when you allow unqualified and disingenuous puppets to run our state. Our natural treasures are being sold out to and destroyed by the highest (or lowest) bidder all in the name of being “customer friendly.”

← Patricia Randolph’s Madravenspeak: As CWD rises in deer herd, what about risk for humans?
DNR: No Violation of Any Kind Committed by Hounders “Training” Their Dogs in 2012 →

6 responses to “Cathy Stepp…….Only In Wisconsin”