Patricia Randolph’s Madravenspeak: Killing wildlife should be understood as an addiction 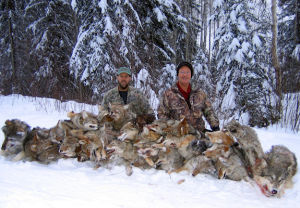 The most important thing to develop in young people from grade school to their mid-20’s is empathy.” — James Catterall, UCLA Center for Culture, Brain and Development

If professor James Catterall is correct — that empathy is the most important value to teach— why are we allowing the Department of Natural Resources, a state agency, into our middle and high schools and trade schools to teach young people recreational torture and killing of innocent wildlife?

The DNR, funded on killing licenses, staffed by killing proponents, allied with its hunter/trapper/hounder clientele, wants its power base expanded and secured against the majority of us. They know the best way to do that is their legislated 12-member recruitment team going after kids. Addict them early and keep them long.

On a hunting website, a hunter recalls. “I was 13 years old when I started hunting with my dad. I still remember my first kill like it was yesterday, even though it has been 11 years. I cried for three days straight, could not eat or sleep either… It is harder for some than others, but it gets so much easier thank god, lol.”

Dr. Gabor Mate, author of “In the Realm of Hungry Ghosts,” writes about addiction as an adaptation of self-soothing. His studies show that we are “prisoners of childhood traumas that become the bars of our prison until we become conscious.”

Mate writes: “The automatic repression of painful emotions is a helpless child’s prime defense mechanism and can enable the child to endure trauma that would otherwise be catastrophic. The unfortunate consequence is a wholesale dulling of emotional awareness … (killing gets easier) … When we flee our vulnerability, we lose our full capacity for feeling emotion …. The war mentality represents an unfortunate confluence of ignorance, fear, prejudice, and profit. … The ignorance exists in its own right and is further perpetuated by government propaganda.”

It is traumatic and confusing for children to have adults teach them that causing suffering and death is commendable and praise-worthy. John Olson, head of trapping for the DNR, once confessed to me, “I am the way I am because of childhood incidents involving the death of my dogs.”

Another hunter describes the adrenaline rush after killing, “After the shot your body just dumps endorphins and adrenalin into your system, it’s almost a high.”

Mate states that adrenaline is just another drug, a self-soothing attempt to offset trauma.

We now live in year-round violence, with the fatally flawed and dysfunctional DNR promoting vastly expanded killing of our wildlife. The world is biophysically finite, yet hunters are recruiting more young people and women into trapping, hounding, torturing and killing our wildlife. The general public, taught to be disengaged and powerless, is purposefully disconnected from the death culture silencing our woods and waterways.

Wisconsin trapping videos show grinning men, women and children, with descriptions of how much they enjoy the “sport.” One titled his video “153 raccoons.” Another Wisconsin trapper posted part of his 2012-13 season on YouTube with the entitled sentiment, “If you’re an anti (against trapping) don’t bother to comment because I don’t care what you have to say.” He knows that “antis” have zero rights to protect since wildlife is privatized only to killers. He showcases 21 foxes, over a dozen beavers, skunks, squirrels, muskats, minks, and dozens of raccoons, showing them alive trapped, and the lifeless result. He takes his children along to sift dirt over the traps and participate. Our world is his for the bludgeoning.

Although trappers number one-fifth of 1 percent of Wisconsin’s population, they have the right to kill as many animals as they have time to kill. Humane citizens have no rights to tame one fox or befriend and protect him. Or to save one orphan fawn. We have no right to protect wildlife on our own property, lured off to their deaths. Although wildlife watchers bring in three times as much revenue directly to state tax coffers and generate economic impact comparable to hunting, we have zero rights in a system financed on killing.

We are simply irrelevant to the DNR. Is this freedom? The DNR will continue privatized ecocide until the public cares to stops them.

I served a decade ago on the trapping committee of the Conservation Congress, a hunter-controlled advisory body to the Legislature. Trapping for six months of the year and recruiting a thousand new trappers annually is quickly exterminating wildlife in Wisconsin.

“Apathy and evil,” says Jake Thoene. “The two work hand in hand. They are the same, really. … Evil wills it. Apathy allows it. Evil hates the innocent and the defenseless most of all. Apathy doesn’t care as long as it’s not personally inconvenienced.”

Protecting children and wildlife from the DNR is our urgent task.

Wolf petitions to sign and network: Sign a petition to stop wolf cruelty and to oppose the end of all protections for the gray wolf.

2 responses to “Patricia Randolph’s Madravenspeak: Killing wildlife should be understood as an addiction”