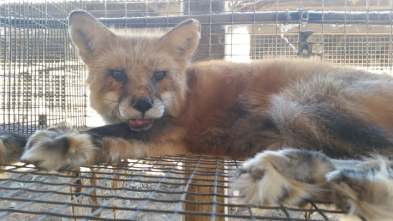 “Hidden off a country road in Wisconsin is a decrepit facility that makes a business of torturing and killing small animals for the fur trade.” ~ undercover PETA investigation

Dillenburg Fur Farm in Shawano County has been torturing and killing minks and foxes in a man-made government-sanctioned hell for 40 years. They suffer from the day they are bred to the day they are gassed, bludgeoned, have their necks broken, or simply die of exposure and abuse. For money. Cruelty as a business and way of life. It is one of hundreds if not thousands of such facilities across this state. Wisconsin is the primary mink producer in the country.

A PETA whistleblower worked at the Dillenburg facility for two months, documenting the casual everyday cruelty and filthy wire cages. This particular Wisconsin facility houses 100 foxes and 2,500 mink. You can see the report in this three-minute YouTube video and these photographs. From breeding to killing, it is a life of misery.

Even kind, conscious humans seem to  have a loose screw that allows them to ignore the reality of suffering around them, not to look at videos (too painful), and so these atrocities continue decades after we have understood the playful, loving and peaceful nature of other animals. Our pets teach us who these other animals are. Think of your dog in these conditions used for this purpose. Would you take a stand to end this?

The calm voice of the undercover witness describes a white mink he named Miss Mary, who was so frightened by the pressure washer used to flush out the cage that she chewed a hole through the bars, leaving her mouth bloody, her teeth broken. He saw no veterinary care given. This is often also the fate of animals trapped in the wild, who break their teeth on the steel traps and snares, chewing off their own limbs to free themselves.

Although DNR captive animal regulations stipulate that wildlife in cages with wire floors must have solid platforms for resting and dry bedding when the temperature goes below 50 degrees, none of this is evident in the video or photos.

The DNR website for captive penning of foxes stipulates 120 square feet per animal, minimum. Is that just for some other foxes? The fox cages in the YouTube look to be much smaller. No solid platforms. Fisher pen requirements are 120 square feet but there is no mention of mink.

The narrator describes and films feces piled over a foot high below the wire cages, so minks live in ammonia fumes. It shows the animal’s fear reaction, circling the cage frantically trying to escape. They often are found dead in their cages.

The owner, after killing D2 in a make-shift gas chamber, said, “He put up a hell of a fight.”

Workers crammed dozens of minks into the gas chamber and pumped it full of dirty gas from a running engine. One suffered 20 minutes in the chamber before dying, and the owner said, “Yeah — he’s moving around — hiding under carcasses for air.” He broke the neck of another who survived.

When I was fielded calls on Wisconsin Public Radio on a morning talk show some time ago, a caller recalled seeing skinned minks whimpering, still alive on the “dead pile” of a trapper’s fur shed.

Apparently anything can be done to these animals with no apparent oversight. There is no money provided or mandates for surprise visits or legal action.

A couple of years ago, I spent three afternoons poring over records of hundreds of captive wild animal fur farms from all over the state. I could not get through them all.

The Fur Commission USA, which has represented mink farmers since 1994, estimates the global trade at $40 billion. Retail fur sales in the United States increased over 7 percent in 2014 from 2013 sales, to $1.5 billion. It’s a mind-boggling growth rate.

Following their probe, PETA called for an investigation of animal abuse at Dillenburg Fur Farm, which is now under way by the Shawano Sheriff’s Department. As for the Fur Commission, its executive director, Michael Whelan, told the Shawano Leader that he had seen the PETA video from the Dillenburg farm, and said, “There’s nothing on there that I would call ‘horrendous.’” He said that that while he is waiting for results of sheriff’s investigation, he is skeptical of PETA’s claims.

You can help by contacting the governor, your legislators and authorities in Shawano County, where the Dillenburg Farm is located. The video and accompanying pictures can be shared with them and shared widely on social media.

Laurie Ross at the DNR can forward your statement to the Natural Resources Board and DNR Secretary Cathy Stepp: Laurie.Ross@Wisconsin.gov

Patricia Randolph of Portage is a longtime activist for wildlife. madravenspeak@gmail.com or www.wiwildlifeethic.org

Posted by dvoight09 on February 8, 2016 in Uncategorized